How My Investing Changed After Financial Independence - Passive Income MD

BlogAll Articles
How My Investing Changed After Financial Independence 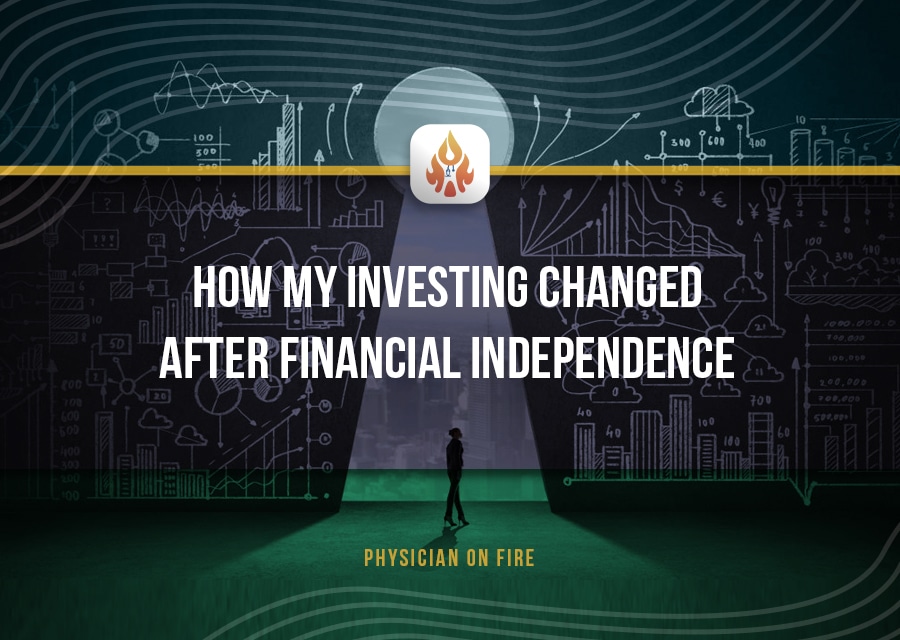 How My Investing Changed After Financial Independence

An early career physician has a lot going on and doesn't need to get everything just right, but there are a few financial priorities that should be recognized. In this article, Leif of Physician On FIRE will share how he built his portfolio over the years.

PIMD welcomes Physician On Fire as our guest post. POF is a personal finance website created to inform and inspire both physicians and our patients with insightful writing from a physician who has attained financial independence and the ability to retire early. Physician On Fire is an affiliate partner.

For the first decade or so of my working career, I shoveled money into mutual funds and didn’t put much time or effort into thinking about other options. However, after realizing we were actually financially independent, my investing has changed as I added different asset classes for a variety of reasons.

Five years into my career, I invested in a small craft brewery, and that would be my only “alternative” investment before reaching financial independence.

I didn’t even add bonds until roughly halfway through my 13-year anesthesia career.

However, since realizing we were truly financially independent late in 2014, I’ve changed up the way I’ve invested additional money. I’d like to share how and why my investing has changed.

How My Investing Has Changed After Financial Independence

I'll start by saying I believe in the effectiveness and simplicity of a three fund portfolio or any variation on it.

Buy a few index funds (US stock, international stock, bonds), rebalance occasionally, and reap the rewards. It’s simple and time has shown how well it can work.

My portfolio essentially has a four fund portfolio as the foundation. I’ve added a REIT index fund as the “fourth fund.” I’ve also sliced and diced a bit, breaking the US stock into different funds and doing the same with the international allocation. Tax loss harvesting, which is worth $1,000 to $1,500 a year, is one reason for mixing things up. If I own a fund in my taxable brokerage account, it’s best not to hold the same fund elsewhere.

I’ve also exchanged funds numerous times, so I now own both Vanguard’s S&P 500 fund and their Total Stock Market fund even though their performance correlates almost perfectly.

I’ve also bought into the idea that small value stocks may deliver a higher return over the very long run. That has not been the case over the last decade, but that’s actually a small window in the grand scheme of things. I’m counting on mean reversion to kick in at some point.

I’ve also tilted toward emerging market funds as part of my international allocation in hopes of possibly eking out a slightly higher return there. The increased volatility is one price you pay, but that also means more potential losses to harvest.

If You’ve Won the Game…

What he means is, if you have all the money you need to live the life you want, why not dial down the risk and shift your investments to safer, less volatile assets, i.e. more bonds and fixed income instruments, and a lower percentage of stocks.

Suze Orman, who doesn’t understand the FIRE movement and is worth tens of millions of dollars, has been known to be invested almost completely in zero-coupon municipal bonds.

She won the game decades ago, and she stopped playing.

Meanwhile, Coach Carson‘s alma mater, Clemson, was up 52 to 7 over the Georgia Tech Yellow Jackets at halftime in a recent duel on the gridiron. Clemson kept playing, winning the game 73 to 7. Four players threw passes that were caught by 17 different receivers, and 11 players recorded rushing yardage.

Even the esteemed Dr. Bernstein has been known to say that if you’re winning the game by a large margin, as in your annual spending is 2% or less of your total assets, there’s really no reason to quit playing. You can afford to give up a lot of points and still come out victorious.

When I left my W-2 job in 2019, I found myself teetering on the edge of that 2% mark. It’s true that if I just put all of our money in a safe investment that could keep up with inflation, we would have about 50 years without money worries, as long as our spending assumptions prove to be true.

I would also be giving up the opportunity to potential to see our nest egg compound over the years, most likely doubling at least a few times over those same 50 years if I were to remain invested in assets more likely to appreciate, like stocks and real estate.

I decided I’d keep playing the game, allocating about 5 years worth of living expenses to bonds, and continuing to invest the rest more aggressively.

How My Investing Has Changed

Like Clemson, I’ve started spreading the ball around a bit more with the income I’ve earned since becoming financially independent.

My investments in alternatives have increased from one small investment in a brewery to about 40x that amount invested across a variety of real estate and startup investments.

I’ve got debt investments in a second brewery and in a fix-and-flip home lender.

We bought some lakeshore property, thought we might build on it, but decided to sell it instead for a tidy profit.

There are two ground-up construction projects in Texas that I’m participating in via Crowdstreet. I’ve also invested in real estate funds from both DLP (Dream Live Prosper) and Origin Investments.

I’ve even got some income-producing farmland, two acres in Arkansas obtained on the AcreTrader platform.

Early in 2020, I invested in shares of a high-end condominium in Miami via Compound, a company that was later acquired by Republic.co, a mature startup that, among other things, helps other startups connect with investors around the world.

See here for an update on my various real estate investments and their performance.

I was given an opportunity to invest in Republic itself, an opportunity that would not have been possible if I hadn’t shown faith in Compound prior to the company being acquired. I jumped at the opportunity; Republic.co is like a much better Kickstarter with some serious vetting and the possibility for investors to have real equity in the small percentage of companies that pass their due diligence process.

Not only do these investments add a new level of diversity to my portfolio, but they are also rather fun to collect, are creating different post-FI income streams, and I’m learning a lot in the process, too.

Altogether, I’ve allocated about 20% of my portfolio to alternatives (including real estate). That percentage may grow for two reasons. One, if these investments outperform our combined stock and bond allocation, there will naturally be a higher percentage than before in the alternatives. Two, we can better afford to take additional risk as our nest egg grows relative to our needs.

If all of these “alternative” investments were to go to zero, which I’d venture to guess is statistically impossible, we would not be destitute. In fact, we’d still be just fine. We’ve still got the modified four fund portfolio with about 40x our annual expenses to fall back on.

Clemson kept playing because they want to win another championship. They were able to get valuable gametime experience for many of their athletes, and the margin of victory will impress those who vote in the polls and for the final playoff seedings, assuming they continue their winning ways.

I keep playing because I’m no longer playing simply for myself.

Yes, I believe we have beyond enough for my wife and me, but there are others who could benefit from a growing pile of money.

We do have children, and likely, they’ll someday have children of their own someday. I hope that by the time my wife and I move on from this earth, our boys (then men) will have reached financial independence on their own, but if not, we should be in a position to leave something of a legacy if that’s what we choose to do.

Additionally, my website has a charitable mission, and we’ve been able to donate hundreds of thousands of dollars in online profits. We’ve made grants to hundreds of charitable organizations while continuing to grow a donor advised fund that will benefit charities we choose for decades to come.

If the Giving Pledge accepted people like me with a single digit number of millions, I’d sign it. By continuing to play the game, maybe we’ll have enough someday to qualify for a signature. I don’t know that I’d want to give it all away, but the pledge only requires you give away half of your accumulated assets.

I’m game about that.