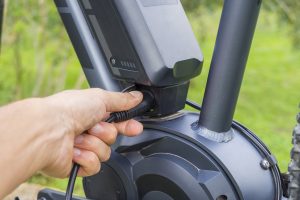 Physician on FIRE shares his experience of one year of commuting to work on a Modified Electrified Fortified e-bike. Here are his hints and tips for three-season electric bicycle commuting.

A year ago, I had just completed the TK-421 modification of my Fortified e-bike, turning the sleek and solid 8-speed commuting bicycle into a powerful, motorized beast. For step-by-step instructions and my first impressions, see An Electrified Fortified Commuting Machine.

I only had a couple weeks to ride it before the air became frigid and the snow started to fall. Are there hardcore riders that forge on despite the adverse conditions? Yes, and I'm not one of them.

If I had a fat tire bike and wasn't primarily commuting on paths that are dominated by snowmobilers four to five months a year, I might have considered biking further into the fall and starting earlier in the spring. As it stands, my tires don't handle snow and ice, and I'd rather not be taken out by a Polaris doing 65 mph.

One Year of Commuting With a Modified Electrified Fortified Bike

In the last year, I've taken my bike to work more often than not. Since I've been working part-time most of this time, it's not actually all that much riding. The odometer reads just under 200 miles.

Most months, I commute back and forth to the surgery center, a 6-mile round trip, four times for a 40-hour workweek and put in a 72-hour weekend on call for our hospital, which is about three-quarters of a mile away.

Finally, a couple bonehead moves by yours truly put my e-bike out of commission for part of the summer. In those weeks, I used my road bike instead. Interestingly, having the experience of taking my e-bike to work consistently gave me the push I needed to take the road bike every day rather than drive myself a few miles each way as I often did before.

Lessons Learned from a Year of E-Biking

Dress for Success. Layers are important, and one of them should be water-resistant if there's even a hint of a chance of inclement weather. It might be 40 and dark in the morning and 80 and sunny in the afternoon.

When you're biking at 20 to 30 miles an hour, gloves can keep your hands warm. When the temperature drops into the 20s and 30s, a skull cap and hiking boots or some kind of windproof footwear are key. I've also been known to wear a ninja-style balaclava and ski goggles when it's particularly cold and/or wet.

Pannier bags are awesome. After years of wearing a backpack to carry my lunch, computer, ID, and any other gear I might need, I got the waterproof pannier bags from Fortified (currently OOS, but Amazon sells some). I no longer wear a backpack for the commute, the bags hold as much or more than most backpacks I own, and I can't believe it took me this long to make the transition.

Keep your butt dry and comfy. The Fortfified bike comes with a water-resistant seat that just needs a quick wipe after a day out in the rain. That's a great feature, but I like a little more cush for my tush. A gel seat, with or without shocks, along with a waterproof seat cover (or gallon ziplock bag) is another option if you'll be parking your ride outdoors while at work or out and about.

Lights serve a dual purpose. I have a headlight, tail light (both capable of blinking) and a third “disco light” that lights up the ground around me like the dance floor at Studio 54. The headlight helps me see, and the other lights help people see me.

For a quick video of the disco light action, see my Instagram post from one recent call night.

Drivers won't see you, anyway. Assume that people in motor vehicles will not see you, despite your best efforts. They're moving faster, have obstructed views, and will win every collision with a bicycle.

Bicycling legally is not enough to protect you. Expect drivers to roll through stop signs, not look both ways, and not check sidewalks or bike lanes for pedestrians or bicyclists.

When I was in Boston for the ASA Annual Meeting last year, I visited the Fortified Bike headquarters, had lunch with Tivan, the company's founder, tested out their readymade e-bike, and borrowed a bike to tool around town for four days.

I went to Harvard. I cruised through MIT. I saw Fenway Park, the Boston Common, and the original Cheers pub. I rode the green bike lanes and had a car door flung open not ten feet in front of me.

Despite hitting both brakes hard, I hit the half-open door with force. The car, bike, and my left hand suffered minimal scrapes, but it could have been uglier. Vigilance is key, especially in a busy metro area.

Wear a helmet. My friends at Fortified Bike sent me a stylish matte black Thousand Helmet that is much more comfortable and less bulky than the waffle-fry style hard foam hats I've worn in recent years. It's also got a “hidden” hole to accommodate a bike lock.

I don't go to ground often, but it only takes one bad incident to change your life forever. As a father of two boys, I also want to set a good example for them. I may not have worn a helmet at their age (did anyone back then?), but I want them to wear theirs, and so I wear mine, too.

I will add that reflective clothing or tape is a good idea; if I were biking primarily on the roadways, I would be wearing it.

The Finances of Bike Commuting

Bikes don't cost much, at least not compared to automobiles. I've got about $1,000 into my e-bike, although it would be closer to $2,000 if Fortified Bike hadn't gifted me the bike and gear. You can spend $5,000 or more on a carbon-frame beauty, or you get a cheap, heavy bike for under $200. Multiply these numbers by at least 10 if you're talking about cars and trucks.

When it comes to operating costs, there's no comparison. Bicycles are very low maintenance. You might pay for the occasional tune-up, replace an innertube or tires every once in a while, and with an e-bike, you'll pay to charge the battery.

How much will a battery charge increase your electric bill? About a nickel, according to cynergybikes.com. That nickel is good for 30 to 50 miles on my bike, depending on where and how I ride. Over the course of a year, charging your e-bike's battery might cost a few dollars, or the cost of one gallon of gas.

I like to think of my savings per mile as about 50 cents per mile biked. That's a little less than the IRS reimbursement rate per mile driven. For every 100 miles biked — and some bikers I know do this weekly — about $50 is saved. At $50 a week, you're almost halfway to funding a Roth IRA.

There can be repair costs. For example, if you shorten the chain by a couple links and use the pedal assist on your first test ride, you just might bend the bejeezus out of the rear cassette and derailleur.

I did. Parts and labor ran me nearly $200 from that gaffe.

Compare that to paying the $1,000 deductible when we hit a deer (I maintain the deer hit me, actually) or having your car totaled in a similar buck versus vehicle incident like our neighbors just did.

We were able to help our neighbors out, selling them our family van that they showed a lot of interest in at a very good price. As a bike commuter, we're able to get along just fine with one vehicle for awhile while we shop around for our next automobile — one that will tow a travel trailer.

Could we be a one-vehicle family long-term? Not yet. Between my work, the kids' school and extracurriculars, there are too many times when two vehicles are required, particularly in the winter months. Someday, possibly, but we're not there yet.

In summary, biking saves you money. Lots of money. The exercise — yes, you still get exercise on an e-bike — will help keep you healthy, too. Well, healthy as long as you don't collide with a deer. Or a car for that matter. Safety First!

Do you bike to work? Do you own an e-bike? What are your tips and hints for new or would-be bicycle or e-bike commuters? If not, what's holding you back?