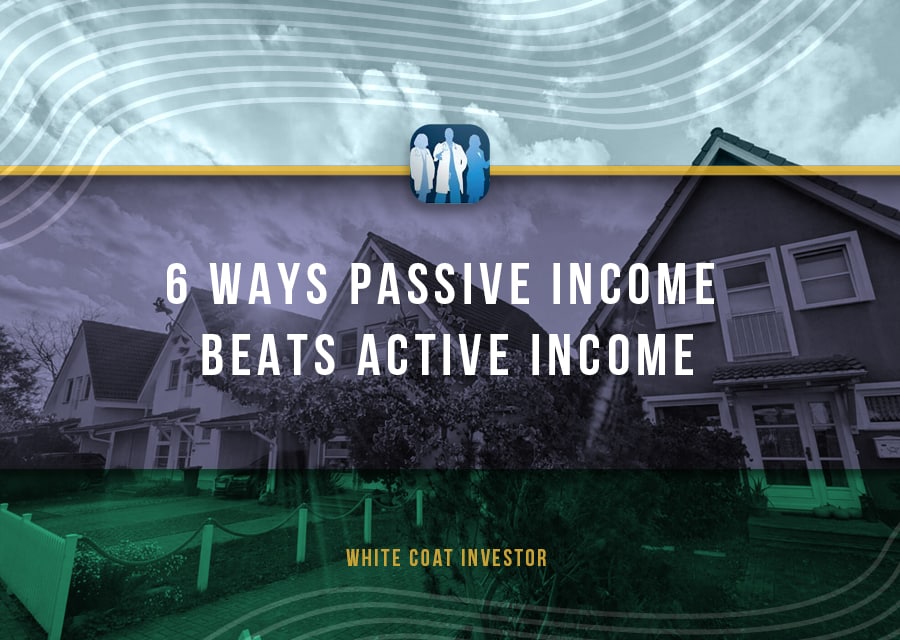 One of the major premises of this blog is that a physician need not do anything special in order to reach financial independence and “live the good life”. She doesn't need a side gig. She doesn't need fancy investments. She doesn't need a financial advisor. Simply living like a resident for 2-5 years after residency and then continuing to put 20% of your gross income into a reasonable, simple investing plan should enable any physician to meet all their reasonable financial goals and achieve financial freedom within the span of a typical career.

That said, from time to time I enjoy writing about some of the other ways to build wealth. Fancy investments are interesting and sometimes have different risks and rewards when compared with a basic index fund portfolio. Entrepreneurship has changed my life and that of many other physicians. Early financial independence opens all kinds of other doorways in your life. So in a blog about all things financial for high earners, from time to time I write about these other subjects. Today is one of those days.

When comparing the two sources of income, passive income beats the pants off of active income in almost every respect. Here are six reasons why:

Unfortunately, The Patient Protection Affordable Care Act (PPACA) not only added that 0.9% Additional Medicare Tax, it also added a 3.8% Net Investment Income tax on unearned (passive) income above $200,000 ($250,000 MFJ). So high earners are going to pay 3.8% (2.9% Medicare tax plus 0.9% Additional Medicare Tax or 3.8% Net Investment Income Tax) on both earned and unearned income.

Prior to PPACA, this was a huge advantage of passive income over active income, but now that only applies to lower earners. High earners have already maxed out their Social Security taxes and will pay the same 3.8% either way. The benefit to cost ratio of payroll taxes can be even lower for a dual-income couple, so passive income can be an even better deal for them, but again, this doesn't really apply once both spouses are each making more than the Social Security Wage Limit.

Payroll taxes are primarily Social Security and Medicare taxes. All earned income is subject to Medicare tax. That's 2.9% (including the employer portion), plus the extra PPACA tax of 0.9% for a high earner.

Real estate investors don't get to enjoy that lower qualified dividends rate on their passive income, but they get something almost as good—depreciation. Now I'm of the school of thought that you get to take depreciation mostly because buildings and appliances really do depreciate, but even so, it gets pretty favorable tax treatment, particularly for a high earner. Depreciating your property allows you to defer taxes on them until you sell the property and the depreciation is recaptured. That deferral by itself is very useful, particularly if it allows you to defer it until such a time as you are in a lower bracket. You can also avoid that recapture completely by doing 1031 exchanges from one property to another until the owner dies and gets that step-up in basis at death. But wait, there's more. That recapture tax rate maxes out at 25%, even if you're in the 37% tax bracket.

#4 Passive Income Works When You Aren't

Let's move away from the tax advantages of passive income over earned income now, although I think you've gotten the message—people with high earned income are the suckers in our progressive, capitalistic tax system.

One of the biggest advantages of passive income is that it works when you aren't working. The more passive the income, the less work that is involved at all. This appeals to my inherent laziness. But consider a high-powered surgeon. Sure, her hourly rate, while she is operating, is astronomical. But as soon as she walks out of the OR, that income stream stops until she scrubs in again. Vacation? Not only is there no income stream, but there is likely a negative one due to overhead. When a passive earner is on vacation, that income stream, small as it may be in comparison to the surgeon, keeps right on working. Interest works both ways and as my kids know, interest should be something you get, not something you pay. As J. Reuben Clark said nearly a century ago:

“Interest never sleeps nor sickens nor dies; it never goes to the hospital; it works on Sundays and holidays; it never takes a vacation; it never visits nor travels; it takes no pleasure; it is never laid off work nor discharged from employment; it never works on reduced hours; it never has short crops nor droughts; it never pays taxes; it buys no food; it wears no clothes; it is unhoused and without home and so has no repairs, no replacements, no shingling, plumbing, painting, or whitewashing; it has neither wife, children, father, mother, nor kinfolk to watch over and care for; it has no expense of living; it has neither weddings nor births nor deaths; it has no love, no sympathy; it is as hard and soulless as a granite cliff. Once in debt, interest is your companion every minute of the day and night; you cannot shun it or slip away from it; you cannot dismiss it; it yields neither to entreaties, demands, or orders; and whenever you get in its way or cross its course or fail to meet its demands, it crushes you.”

I want interest (and other sources of passive income) working FOR me, not AGAINST me.

While reading a very interesting book recently about the conquest of the Northwestern Territory (it's Ohio, not Oregon for those of you who aren't history buffs) I realized that the founding fathers of the US were all unabashed capitalists. Washington, Hamilton, etc. all held title to huge tracts of land West of the Appalachians that they had been speculating in for decades. Forming the US Army (a standing army was a big deal to a people who at the time equated a standing army with tyranny) and conquering the Iroquois was, in at least some respects, about profiting on their investments. While WCI readers probably don't have any plans to conquer other nations, the real point of all this financial stuff we talk about on this blog is to turn yourself into a capitalist as quickly as possible. While capitalism has its issues, it's still the best economic system we've found yet.

Capitalism basically means passive income. It means making your money work as hard as you do, or better yet, did.

Another great aspect of passive income is that it is often completely scalable. Consider my first book. If I sell 10 copies of it, I might get $100. If I sell 100 copies of it, I might get $1,000. How much additional work did it take for me to sell those extra 90 books? Zero. And there's nothing keeping me from selling 1,000 or even 10,000 copies of the book. A website is the same way. No limit on the eyeballs that can view it (as long as I keep upgrading the hosting plan!) Shares of stock are the same way. Owning 100,000 shares is no more work than owning 10 shares. If you're a real estate investor, once you get your “system” in place (agent, insurance guy, attorney, accountant, property manager, repairman, etc.), it may not take you much more work at all to own 10 properties than to own one. Maybe you do speaking gigs and charge $50 a head. Is it any more work to speak to 500 instead of 50? Not really. Leveraging your money is great, but leveraging your time through scalability is even better.

The Only Negative of Passive Income

In fact, as I laid in bed one morning coming up with this post, I could really only think of one aspect of passive income that is worse than earned income. If you are a high earner, you can't deduct real estate losses against your earned income unless you qualify as a “real estate professional“, which basically means you spend > 750 hours a year doing it. That's it. The rest of the time, passive beats active.

What do you think? What sources of passive income do you have? Which ones are you trying to develop? Do you think it's fair that capital gets better tax treatment than labor? Why or why not?

Sign up to receive THEIR free “Real Estate Opportunities” newsletter and be the first to hear about specific deals, special discounts, and everything real estate!