Can I Hire My Spouse as an Employee? - Passive Income MD

BlogAll Articles
Can I Hire My Spouse as an Employee? 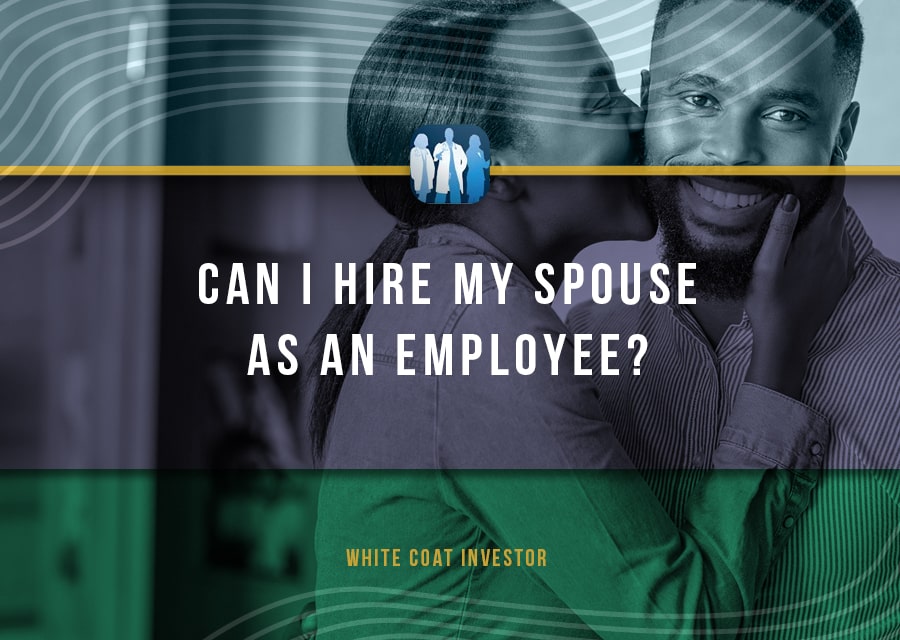 Can I Hire My Spouse as an Employee?

One question I frequently receive by email is whether you as a physician should employ your spouse. One recent emailer is an independent contract emergency physician who also serves as the medical director for several EMS/fire departments. The thinking was that since this unincorporated doctor sends invoices, signs controlled substance forms and scans them in, and mails documents in their medical director/consulting work, perhaps they could employ the stay-at-home wife to take on those day-to-day activities so she could contribute to a Solo 401(k).

The doctor's question: Will I need to officially employ her (i.e., W-9, pay payroll taxes, etc.), or can she take part of the “profit” of my business.

The answer: Yes, you can employ your spouse in this fashion.

Now, let's get to the question they should have asked:

Should I Employ My Spouse?

The answer to that is probably no. Let me explain.

There are generally two reasons why people want to employ their spouses.

The first reflects a very beginner-level of financial sophistication. It involves a vague idea that there is some sort of a tax break there for doing so. This is not correct. There is no tax break here. Most couples, particularly couples where one spouse is not currently working, file their taxes Married Filing Jointly. Thus, any additional income brought in by the household, earned by either spouse, is taxed at their marginal rate.

In the case of a physician, this is likely quite high. So if you're already in the 32% tax bracket and your spouse earns just $10K, 32% of it is going to the federal government. For this reason, many couples decide not to bother having the second spouse work at all, much less work for the first spouse. However, when you employ your spouse, what you're really doing is lowering your income and raising your spouse's income. From a federal income tax perspective, it's a wash. The $10K you didn't earn was earned by your spouse, but it's all taxed the same.

The second reason reflects a more intermediate-level of financial sophistication. It usually comes after someone learns about the benefits of retirement accounts. They realize that if their spouse worked, the spouse could get access to another retirement plan. In this case, both spouses could use the solo 401(k). Now it seems a lot smarter to have that spouse working. Instead of only being able to put $61K into a solo 401(k) [2022], now the couple can put $122K into the solo 401(k), potentially saving an additional $61K*32% = $19,520 off of their tax bill. So what is the problem? Payroll taxes.

While that is less than the $19,520 this couple might save this year on taxes, bear in mind that is a tax-deferral. When they pull that money out of the account in retirement, taxes will have to be paid on it. It is likely to be less than the equivalent of $19,520 in today's money, but it's still going to be enough that paying $18,228 in extra tax now isn't going to make it a winning move. Since the working spouse in this situation has already maxed out his social security tax, transferring income from him to his wife does nothing except increase the Social Security tax that must be paid.

Remember that Medicare tax really doesn't matter. It will be paid by either spouse since there is no wage limit cap on it.

When Does It Work to Employ Your Spouse?

Now that we've shown that this won't work out very well for the vast majority, let's talk about some situations where it could work.

#2 If Your Spouse Takes Less Pay

However, your spouse could max out the employee contribution of a 401(k) on relatively little income. For example, if she were paid $25K, she could put in the entire $19,500 employee contribution (plus a little employer contribution), saving over $6K-$7K in income taxes this year. The cost of the additional Social Security tax would be only $25K*12.4%= $3,100. That might be more worth it. Actually, it's a little less, about $2,600, since half the SS tax is deductible.

#3 If Your Spouse Does a Mega Backdoor Roth IRA

Or you could do what Katie does. She doesn't get paid all that much salary for working for WCI (although she is very well paid in distributions as an owner). But she gets paid enough to put $61K in after-tax contributions into the solo 401(k). As allowed by our customized solo 401(k), she can then do an immediate withdrawal and conversion to her Roth IRA of that money. For the cost of about $6,800 in additional Social Security tax, she can get $61K into a Roth IRA.

Remember if your side business is an S Corp and your spouse is an employee at her main gig, then Social Security taxes will be paid twice. She can apply to get her half of the SS taxes back when taxes are filed (use Form 843) but the employer half never comes back.

Beware the 199A Deduction

An even bigger deduction for many business owners than contributions to retirement accounts is the 199A deduction. If a business is eligible for this pass-thru business deduction, there are two factors to keep in mind:

Keep It Legit If You Employ Your Spouse

Overall, while it is a complex situation, it generally does not make financial success to hire a previously non-working spouse “for the tax deduction” even if it will allow additional retirement contributions. However, if you legitimately need the help, at least hiring your spouse will keep the income in the family, even if the spouse works for free. And of course, when you decide how much to pay a spouse, it must be a reasonable rate for real work done. Paying someone $50K for an hour of bookkeeping a week probably wouldn't fly in an audit. If you do hire a spouse as an employee, you must do all the regular employee kind of things. That means collecting a W-4 and an I-9, having a real employment contract, filing W-2s and W-3s each year as required, and running regular payroll. Adding all that hassle onto a bad financial decision in the first place just makes everything worse.

What do you think? Have you hired your spouse? Why or why not? How did you set it up to maximize the benefits and minimize the downsides?