BlogAll Articles
Should You Make Roth or Traditional 401(k) Contributions? 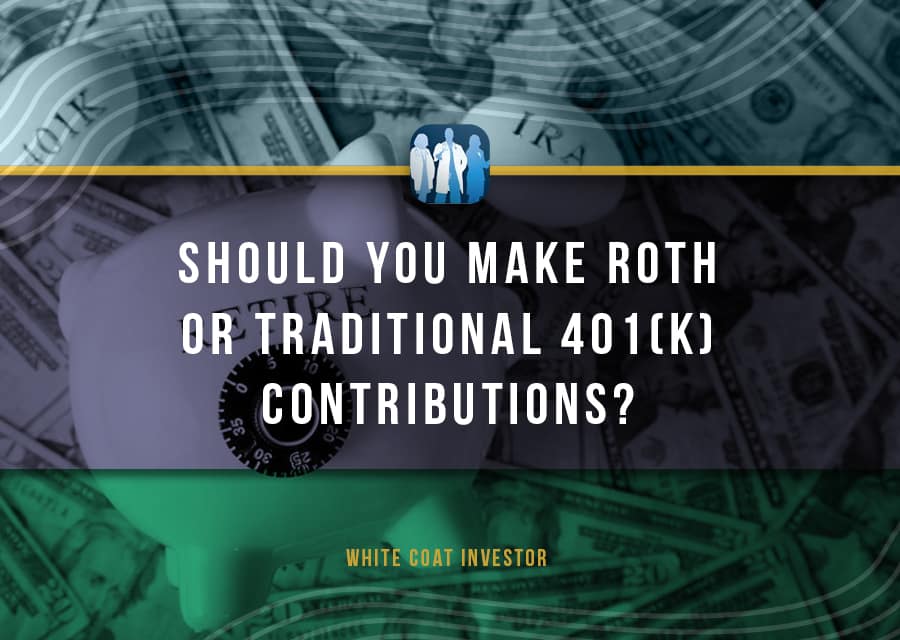 Should You Make Roth or Traditional 401(k) Contributions?

The Roth or traditional 401(k) decision can be complicated for high-income professionals. Consider these factors to best protect your income.

I get lots of questions from readers about whether they should take advantage of their Roth 401(k) (or 403(b)) option to save for retirement. They're usually looking for an easy answer. Unfortunately, it isn't that easy.

I only have one rule of thumb, and that's that residents (and military docs) should make Roth contributions and attendings should generally make traditional, tax-advantaged contributions. But there are plenty of exceptions even to that rule. Others have touched on this question before, notably The Finance Buff, in perhaps his best ever column, who made The Case Against the Roth 401(k) and the Bogleheads in their Wiki Page on Traditional vs. Roth.

Here, I'll try to outline the considerations high-income professionals like doctors ought to consider in the Roth or Traditional 401(k) decision.

Remember that in retirement you can minimize your effective tax rate by withdrawing some of your income from tax-deferred (traditional 401(k)), some from taxable accounts at preferential long-term capital gains rates, and some from tax-free (primarily Roth, but also borrowing against cash value life insurance or other assets) accounts. No one knows exactly what percentage of a portfolio a retiree will ideally have in Roth accounts on the eve of their retirement, but most experts agree that you ideally want some of both.

In 2022, a married couple can contribute $6,000 ($7,000 if over 50) each to a Roth IRA each year—usually via the back door for most high-income professionals since they make too much to contribute directly. If you are limited to a $20,500 contribution to your 401(k) in 2022, then making the 401(k) tax-deferred and also maxing out Backdoor Roth IRAs should provide you the tax diversification that you're looking for.

The most important consideration in the Roth vs Traditional 401(k) debate is your tax rate and how it will change when you retire. Most importantly, remember that your contributions are made at your MARGINAL tax rate (i.e. the rate at which the last dollar you made is taxed), but withdrawals may be taken at much lower rates. For example, if your only taxable income in retirement was from 401(k) withdrawals in 2021 and you were a married couple that took the standard deduction, the taxes on those withdrawals were 0% for the first $25,100 that was withdrawn, 10% for the next $19,900, 15% for the next $61,150, and 22% for the next $91,700.

Obviously, if you are saving taxes at 35% when you contribute money and paying taxes at 35% when you withdraw money, then it doesn't matter which account you use. But thanks to the fact you are likely to have a lower marginal rate in retirement and the fact that you contribute at your marginal rate and withdraw at your effective tax rate, most doctors in their peak earning years are going to be better off deferring taxes whenever possible.

But there may be some other considerations.

Many people hold strong views about future political and economic possibilities that influence their choice of Roth or traditional 401(k). For example, if you believe that future tax rates are going to be much higher than current tax rates, you might be more likely to make Roth contributions and pay your tax now at what you believe will be a lower rate. If rates go up severely, your marginal rate now might even be lower than your effective tax rate later.

Many investors also worry that the government will change “the deal” with Roth accounts and tax them in some way despite promising via the current tax code not to do so. If you're worried about this, you may prefer to get your tax break as soon as possible with a tax-deferred contribution. Some people take their Social Security payments as soon as possible due to similar concerns, despite the fact that under current law it often doesn't make sense mathematically.

If you expect a relatively high amount of taxable income in retirement besides 401(k)/IRA withdrawals, you may be more likely to want to pre-pay your taxes by making Roth contributions. The most common type of income is Social Security. For most retired professionals, 85% of their Social Security income will be taxable. Although individual circumstances vary, most will want to delay their Social Security to age 70, so this effect won't be seen in earlier retirement years. Other retirement income may include a spouse who continues to work, rental income from investment properties, income from taxable investing accounts, and pensions. The more of it you have, the higher the rate at which those 401(k) withdrawals will be taxed.

There is no doubt that if you don't plan on spending the money in your retirement accounts and plan to give it to your heirs instead, Roth contributions are very useful. The main reason is that Roth IRAs (although interestingly, not Roth 401(k)s) don't have Required Minimum Distributions (RMDs) starting at age 72. If you take RMDs out of an account from age 72 until your death at age 90, the account is going to be a lot smaller than if you didn't have to take those. Even if the money is still given to the heir, it will be a smaller amount without the tax-deferred growth available in the retirement account.

Once the IRA or Roth IRA is inherited (Stretch IRA), RMDs start based on the age of the heir. But if the heir is very young, the account is likely to continue to grow if only the RMDs are withdrawn. A tax-free Stretch Roth IRA has the potential to grow to an even larger sum of completely tax-free money (since it can grow tax-free for an additional 10 years after death before withdrawals are made). Your heirs will, of course, prefer that you pay the taxes instead of them. If your heirs don't make much money, though, it's possible that they may have a lower tax rate than you. That means the overall tax rate paid by the family will be lower if the heirs pay the taxes.

If you would prefer to give your retirement account money to charities, you're probably better off with a tax-deferred account, since neither you nor the charity will have to pay taxes on that money at all. Of course, you don't get the usual tax deduction for the contribution if you use your never-taxed IRA money to make the donation.

If you are above the estate tax exemption limits, Roth money counts exactly the same as tax-deferred money when it comes to calculating estate taxes, but it is actually more after-income-tax money.

One of the best arguments against pre-paying your taxes by making Roth 401(k) contributions is that you don't know what the future holds. You can do Roth conversions in later years when your income may be lower. This might be due to cutting back on hours, getting paid less, taking unpaid maternity/paternity leave, doing a sabbatical, or early retirement years prior to taking Social Security. It's much better to do a Roth conversion at 10%-22% than to make Roth contributions paying tax at 28% or more.

All of the discussion above has focused on the federal tax laws. State tax laws also affect the Roth or traditional 401(k) decision. Perhaps the most common is when you plan to retire in a different state than the one you spent your working years in. If you plan to move to a state without an income tax in retirement, tax-deferred contributions now will be that much better. If you plan to return to New York or California from your job in Florida or Nevada, however, you may wish to pay those taxes up front.

The tax code is complex and not always logical or fair. If your taxable income is in the range of a phaseout, choosing to make Roth contributions over traditional contributions may cost you a lot more than you think. Most of these phaseouts occur in the $25,000-$250,000 taxable income range which can catch a lot of physicians. Be sure to run the numbers both ways prior to making Roth 401(k) contributions. It might not be worth it if you lose a valuable deduction due to a phaseout. The 199A deduction can cause people to want to do all kinds of interesting things with their retirement accounts.

If you are going for PSLF, you are likely trying to keep your IDR payments low to maximize the amount forgiven. A great way to lower your taxable income is to make tax-deferred account contributions.

More information here: Roth vs. Traditional When Going for PSLF

If you have a very high income, which I usually define as $500,000-$2 million, you may prefer to make Roth contributions. It allows you to provide asset protection and tax-advantaged growth to more money on an after-tax basis, and if most of your income is going to be taxed at the highest tax rate in retirement, there is little advantage to withdrawing at your effective tax rate (since it is nearly the same as your marginal rate). Along the same lines, you may wish to do Roth conversions of your tax-deferred accounts.

Those who save a lot of money may also want to preferentially use Roth accounts. Basically, because they save so much, they'll accumulate so much wealth that they'll actually be in a higher bracket in retirement than even most of their peak earnings years. This is one reason Katie and I are doing Roth contributions in our 401(k)s these days.

What do you think? Do you use a Roth 401(k)/403(b)? Why or why not? Any other factors that should be considered in this decision?